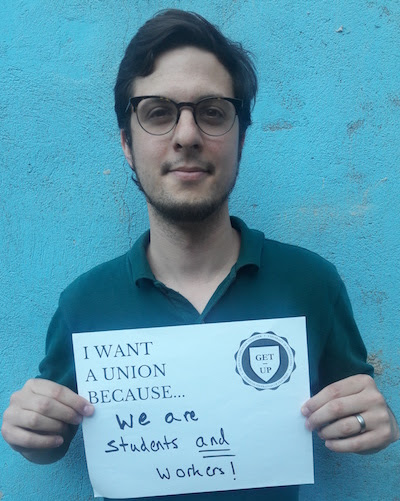 Zach here updating you on day 7 of union hearings. I’m a PhD student worker in political science, where I work on comparative politics and political theory. You might think that makes me prepared to tackle existential questions, but I am flummoxed when it comes to the university’s inability to acknowledge that I exist. Penn’s lawyers and our union’s lawyers are trying to come to an understanding of what a “student worker” is. But Penn prefaced their comments by saying “to the extent any exist.” This is what the hearings are about—not interdisciplinary professors, career counseling, communication skills, or laboratory experiments. Penn still hasn’t decided whether we exist.

Well, the NLRB already has held that graduate students are both students and workers: we exist, and we’re prepared to keep coming back to the hearings, day after day, reminding Penn that we exist and we’re going to fight for a democratic say in our working conditions. The substance of today’s hearings was on the research process and, again, what graduate work really constitutes.

The employer’s first witness was the Dean of SAS, Steven Fluharty, who argued that the mission of the university is the advancement of knowledge. Dr. Fluharty walked us through the process of getting an NIH grant, from the proposal to the letter of approval to a published work. The crux of the lawyers’ argument seemed to be that since our work as research assistants advances knowledge and contributes to our dissertations, it isn’t actually work. By that logic, no academic work is work.

However, the employer’s first witness in the afternoon, Dr. Christopher Murray, a professor of chemistry and material science, argued that the mission of the university is not the advancement of knowledge, but rather educational development. However, this development involves “working in the lab, working on real problems.” Just because student development is part of Penn’s mission doesn’t mean what we do isn’t work, a subject on which Murray was refreshingly clear. Countless times, he referred to graduate students who “work” for him and to the “big job” of TAing a freshman chemistry class with “needy” undergraduate students. At the same time, Murray called his graduate students “a family,” to which we ask: do families pay for healthcare when their members are injured? If so, why don’t his grads get workers’ compensation?

Penn’s other two witnesses took less time. Their final witness, Patricia Rose, director of career services, argued, just like Dean Fluharty, that the production of knowledge through publications was critical, not just for student development but also for getting jobs. The second witness from the morning, Kim Hoftiezer, Director of HR for the libraries, ended on an uplifting note when she revealed that full-time library workers are unionized, represented by AFSCME Local 590. Here’s hoping that we’ll join them as unionized workers soon!

To help get us there, I hope you’ll take a moment to sign our pledge to vote yes in our upcoming union election.