Today was the 13th and final day of our hearings and I only got to catch the tail end because I was doing fieldwork — I came in right as the lawyers and staff were packing up at 12pm. I ran into Coleman before he headed to work. He had been live tweeting throughout the morning, so I got a good sense of what happened before I arrived. Here’s a sketch of the day: 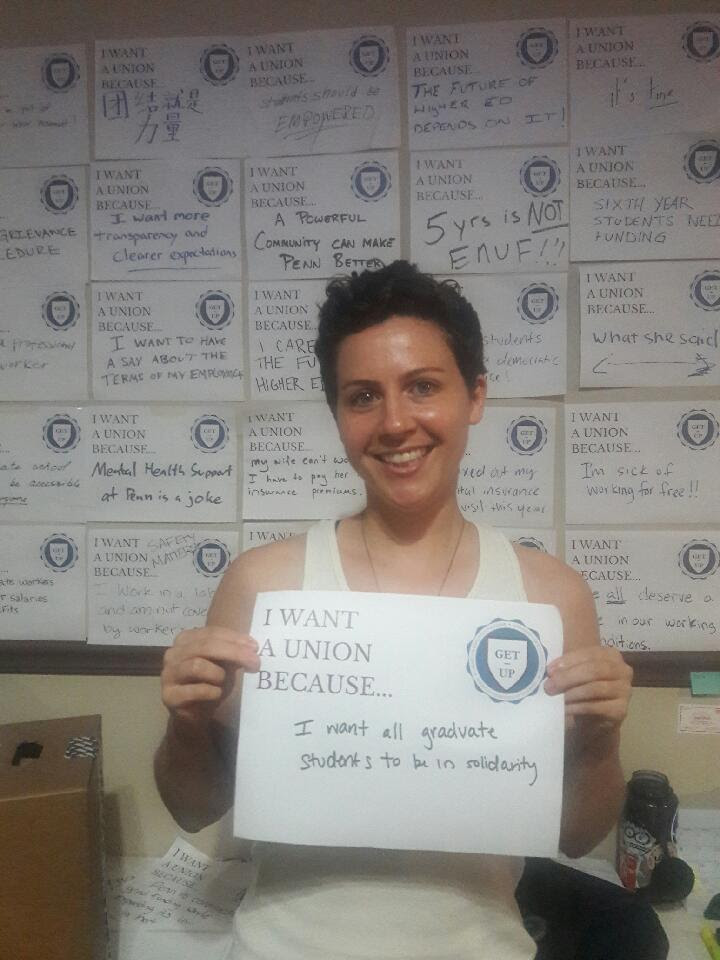 After 12 grueling days of hearings, the lawyers finally acknowledged that the hearings would come to a close. MHO (Madame Hearing Officer) and the lawyers noted that there wasn’t a large audience today, laughing with what seemed to be relief that the hearings were drawing to a close. Mr. Johns, Penn’s leading lawyer, finally acknowledged that not all of his team was from Ballard Spahr, and one of the men there today was actually part of Penn’s general counsel.

There were no witnesses brought to the stand today, just brief discussions about NRLB policy around summer elections, and of course their continuous and asinine assertion that we are “students” not “employees”. As Mr. Johns stated towards the end, “This is the realm of academics, not employment”. Maybe this split is why graduate students are constantly put in exploitative, vulnerable, and boundaryless positions in relationship to faculty. Maybe it’s why we have some of the worst mental health statistics of workers in our age bracket.

Later, when reading NLRB policy, Penn lawyers argued that we don’t qualify for a mail-in ballot election even if we were to be considered employees because we are not “scattered or diffuse” but rather all centralized on campus and in West Philly — yet then only a few minutes later, the summer election was considered to be anti-democratic because it would disenfranchise those who aren’t on campus! These two things cannot be true at once! But we know that calling our election anti-democratic is just another stall tactic–using the rhetoric of democracy to prevent workplace democracy is really poor form, if you ask me.

Penn’s lawyers then tried to undermine our strategy for determining eligibility. We want as many students within the unit as possible to be eligible to vote; Penn’s administration wants the opposite. Their lawyers tried to argue once people finish teaching/researching, they don’t usually go back to it, which factors into voter eligibility. One of my good friends taught for a semester after she returned from fieldwork, and I’m sure we all know someone in that position–these are the people Penn’s administration is trying to disenfranchise, because they have some fantasy that everyone’s teaching and research schedule looks exactly the same. The administration’s lawyers seem keen to ignore the facts. It is so clear that over the past two and a half weeks this administration has made a mockery of our essential contributions to the university and in doing so has continued to indulge these ridiculous arguments to guarantee that our work and presence stay unrecognized.

Penn admin and our lawyers now have 14 days to prepare their briefings for the NLRB (there was some hinting that admin lawyers would ask for more time because of the July 4th weekend…stall, stall, stall). Congrats to everyone in GET-UP for making it through the hearings!! We now just wait to hear back from the NLRB, and get all hands on deck to respond to their decision about the election. I proudly stand in public solidarity with all of my fellow graduate students to say that our work and contributions matter, as does our health, safety, and legal protection. You, too, can stand with GET-UP by signing the public pledge to vote yes for a union!